“As the daughter of Hicksite Quaker parents, Alice was raised to believe that men and women were equal, so you might say she was born a feminist,” wrote Michele Hush.  Paul was one of the protestors who repeatedly stood in silent protest outside the White House, urging President Wilson to support women’s suffrage. While some activists felt that passing an amendment to the US Constitution was an unrealistic goal, she set her sights high and worked for it with passion.

She is known for her banner, “Mr. President, how long must women wait for liberty?”  That question was answered with violent beatings, imprisonment, and force-feeding during a hunger strike. She made sure news of her treatment reached the media, and the outcry helped crystallize support for the 19th Amendment. 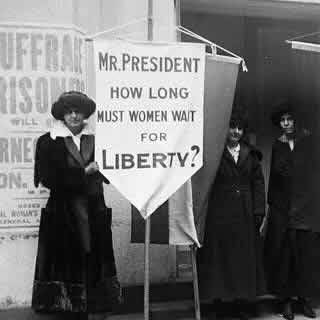 The Alice Paul Institute preserves the historical record of this remarkable woman, who died in 1977 at age 92. It also tries to carry on Paul’s unflagging efforts to bring women equality under the law through grants, awards and educational programs.

Subscribe to this news feed and/or comments via RSS